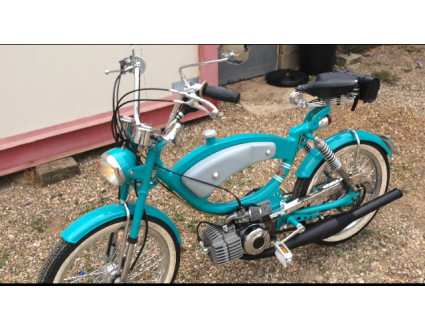 PROJET NO FINISCH, SHE NEED SIDE COVERS FUEL TANK...SORRY MANS!

The fuel tank is handmade, as a curiosity I can contribute that part of the frame is also fuel tank, the seat is a bicycle brooks brand and is adapted by hand, the rims are of 17 inchs AKRONT brand (MADE IN SPAIN since 60's years  AND WORLDWIDE REFERENCE by classics motorcycles) belonged to a Bultaco metralla motorbike, the headlight is a bultaco metralla too" new old stock "  ... the chain guard is adapted from a Chinese motorcycle shit , the tires are for 17'' and its a brand of Slovenia,,  not spensive mans! the  100% total design and wor of this puch bike  is mine...." sorry"

history= Avello, S.A. was a Spanish manufacturer of machine tools and motorcycles, famous for its MV Agusta and Puch motorcycles. It was founded by Alfredo Avello. It began operating on June 1, 1940, building machine tools under the name of Avello and Compañía S.L. From 1951, in his factory in Natahoyo, Gijón district, he already manufactured motorcycles under license from the Italian company MV Agusta, with the names of MV Avello and MV Agusta. At the beginning of the 70s, Avello began to distance himself from MV Agusta, more interested in developing large bikes of several cylinders of four times than in continuing to evolve the lightest, simplest and cheapest of two times, more suited to the Spanish market. For this reason, Avello contacted the Steyr-Daimler-Puch, one of the largest Austrian industrial groups, which, among other things, manufactured an interesting range of mopeds and light motorcycles for years with great success. In 1970, the agreement with the Austrians materialized and shortly afterwards the manufacture of the first Spanish Puch began, in the chains of Gijón that still manufactured MV. In 1983, Suzuki entered the shareholding of the factory, contributing 500 million pesetas (36% of the capital) and leaving the Avello family. In 1988, Suzuki acquires 100% of Avello, SA and changes its name to Suzuki Motor España. In 2012, Suzuki announced that it will close the manufacturing plant in Porceyo, Gijón.1 The only one of the multinational in Europe.